Are You Looking to Achieve Merit Or Distinction in Grade 5 Music Theory Exams in just 4 months?

Over 85 students have joined our intensive music theory lesson.

We are proud to say that all our students had passed the theory exams, with more than 90% of our students earning a merit and distinction!

Our music mood intensive music theory lessons has produced successful students, just like what you see above.

Currently in our 14th batch, we invite you to be our next successful graduate in music theory programme.

Our group music theory classes are arranged to help you pass your Grade 5 Theory Exam successfully in just one sitting so that you can focus on pursuing higher practical grades.

With our proven and systematic approach, 90% of our students have achieved passes with merit and distinctions. We are confident your kids  can be our next success story.

We structured the music theory lessons in a clear & easy to follow plans. Making sure that you understand the whole topic before we move on to the next one.

After every topic, lots of practices will be given with clear illustration on how to answer each of them.

Who needs another boring academic lesson? We make music theory alive so you can enjoy it as much as we do!

All music theory lessons are structured in less than 5 students. A small group size to ensure efficiency.

Previous years exams paper will be provided prior taking of exam. Making sure that you are confident to score Distinction in the real exams.

Our music theory classes are structured according the ABRSM music theory syllabus, a standard curriculum for music theory well recognised by schools and musical programs in Singapore.

Note: Each Music Theory paper is marked out of a total of 100, with 66 marks required for a Pass, 80 for a Merit and 90 for a Distinction. 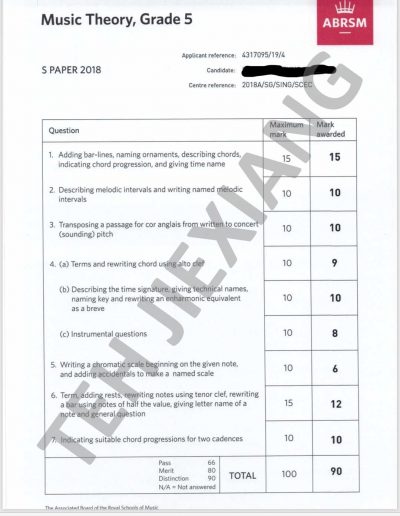 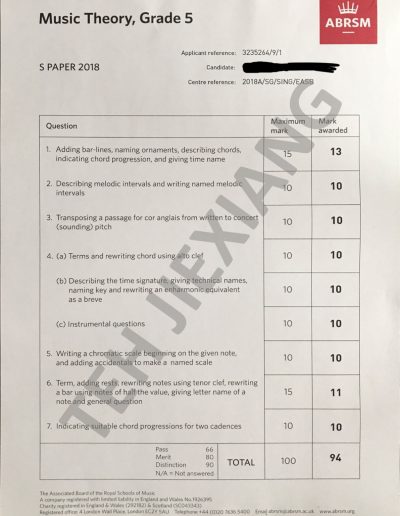 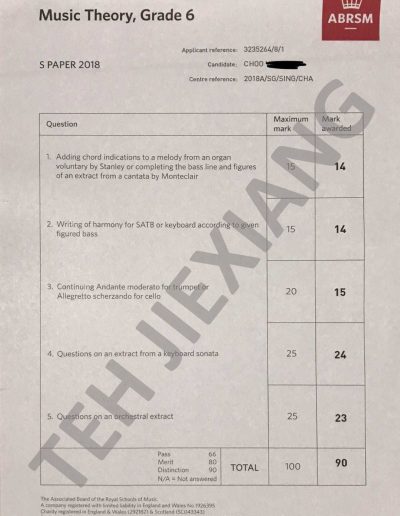 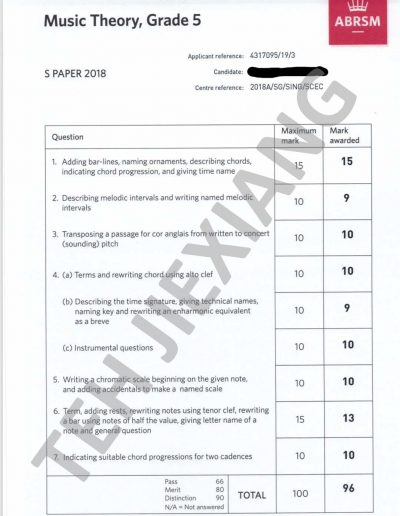 Get a Free Assessment Now

Do you intend to go for the upcoming music theory exam but not sure whether you are ready for the exam?

We have heard of stories where student risk taking the exam without proper preparation and unfortunately failed the exam.

As the music theory exam only held twice a year, that means he would need to wait for one more year to retake that. On top of the monetary loss for the fees (Registration Fees for ABRSM Grade 5 exam is SGD163 (SOURCE: Singapore ABRSM Website), the student misses the dateline and cannot enter MEP and applying for music college. That actually demoralised him a lot..

So DON’T RISK it.

Come for our free assessment where you can have a mock exam. Our tutor will let you know what are the things you need to take note and secrets on how to tackle the exam questions with ease.

“.. After the course, I am ready to sit for my ABRSM G5 Music Theory Exams. I am so proud that I have gotten a distinction with her help…” Teh Jiexiang graduated from the Yong Siew Toh Conservatory of Music, National University of Singapore. He is a recipient of the prestigious Kent Ridge Undergraduate (Merit) Scholarship. He studied under Dr. Thomas Hecht, Head of Piano Studies.

Teh Jiexiang has been teaching piano and theory since 2008. His students range from toddlers as young as 3 to adults over 30 years old. He conducts lessons at both his studio and his
student’s home.

Jiexiang obtained ABRSM Grade 8 in both Piano and Theory in 2006, and in 2008, scored 95%
for DipLCM in Piano Performance. In 2012, he obtained LTCL in Piano performance.

His students have passed both ABRSM Piano and Theory examination. He also accompanies ABRSM string candidates for exams. Teh Jiexiang graduated from the Yong Siew Toh Conservatory of Music, National University of Singapore. He is a recipient of the prestigious Kent Ridge Undergraduate (Merit) Scholarship. He studied under Dr. Thomas Hecht, Head of Piano Studies.

His previous teachers include Dr. Lee Pei Ming, and Dr Eleanor Tan, Vice Dean of Nanyang Academy of Fine Arts. He has played in various masterclasses, studying with pianists such as Mary Wu, Martin Roscoe, and Pawl Lewis. He participated in the 2015 Engadin Summer Festival last summer where he attended masterclasses and workshops conducted by Russian pianist Konstantin Scherbakov,Harold Clarkson, Senior Vice President, Head of Global Touring, Director of IMG Artists, and Gustav Alink, co-founder of the Alink-Agerich Foundation.

He has given performances of Prokofiev and Beethoven Violin Sonatas at the Asian Civilisations Museum. His chamber groups have attended masterclasses under Takashi Shimizu and Geraldine Walther of the Takacs Quartet. He has performed the Brahms Piano Quartet No. 1 at the National Gallery in 2016, and the Paul Juon Trio Minatures this year.

Do you know that

If you intend to go further than ABRSM Grade 6 practical exam in Singapore, you need at least passing the Grade 5 music theory exam. In addition, the ABRSM music theory program is often a prerequisite for secondary school music elective programs. After only a few lessons, I already managed to cover most of the chapters in Grade 4 and 5! “

Music theory lessons in Singapore structured according to ABRSM syllabus. On top of 100% student passing rate, more than 80% of our students, get merit & distinction with our proven & systematic method.